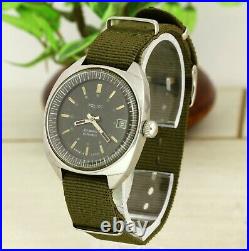 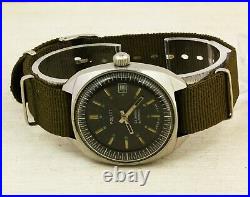 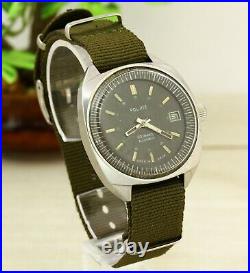 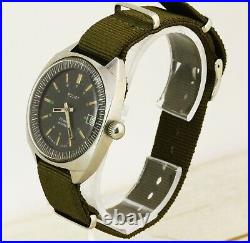 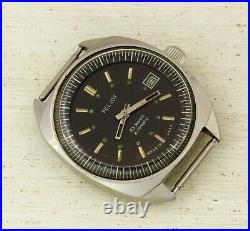 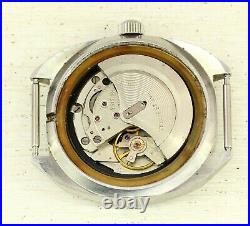 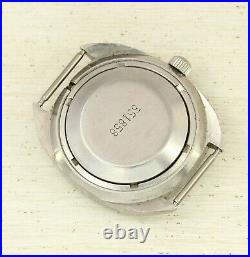 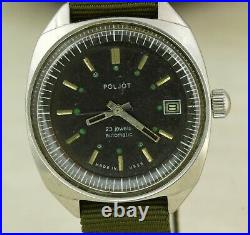 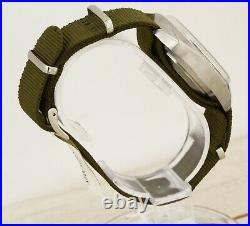 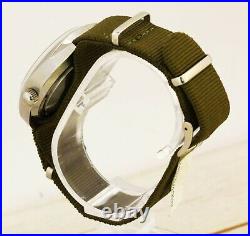 Made in USSR (Soviet, Russian,). Caliber poljot 2616.2H: 23 jewels, shockproof balance, date indicator. It would be great find for any collector. Please see the photos for the assessment of watches. Runs well and keeps time accurately.

Really watches look much better than in the photo. New NATO strap as a gift! DEFECTS: small traces of use.

Twenty-one former Dueber-Hampden watchmakers, engravers and various other technicians helped to train the Russian workers in the art of watchmaking as part of the Soviet's First Five-Year Plan. Interestingly, the movements of very-early products were still stamped "Dueber-Hampden, Canton, Ohio, USA" (examples of these watches are very collectible today). In 1935 the factory was named after the murdered Soviet official Sergei Kirov. As the Germans closed in on Moscow in 1941, the factory was hurriedly evacuated to Zlatoust Russian. By 1943 the Germans were in retreat, and the factory moved back to Moscow, adopting the "First Moscow Watch Factory" name Russian.

In 1947 the first wrist watches under the brand name "Pobeda" and the first Marine Chronometers and Deck watches are produced. By 1951 the production of wrist watches increases to 1.1 million. In 1975 new machinery and equipment for manufacturing complex watches are partly imported from Switzerland.

The first chronograph "Okean" (caliber 3133) is produced for the space station Sojuz-23. In 1990 production of watches and clocks reaches 5 million pieces and in 1991 the international award "Golden Trophy for Quality" is awarded in Madrid. On April 12, 1961 Yuri Gagarin became the first man in space.

During his historic flight he wore a Sturmanskie pilots wristwatch (a transliteration of which actually means "Navigator"). This watch was not specially commissioned for the flight, they were standard issue to all air force pilots at the time. The success of the mission however lead to the factory being awarded the Poljot Russian.
In 1965 cosmonaut Alexei Leonov wore a FMWF Strela (transliteration of , which actually means "Arrow") chronograph during his historic first space walk, thus cementing Poljot's place in space history. As with Gagarin's first flight, Leonov's watch was not specially commissioned. The Strela replaced the Shturmanskie as the standard issue pilots watch. In the late 1970s, the Strela itself was replaced by a new breed of chronographs based around the (then new) 3133 movement (an original Russian movement similar in functionality to the Swiss Valjoux 7734, but with higher number of jewels 23 vs 17 and lever movement operating at 21,600 bph vs 18,000 bph).

Poljot 3133-based watches continued where their predecessors left off and were taken into space by cosmonauts from Russia, France, Germany and Ukraine. On the wrist of cosmonaut Valeri Polyakov, a Poljot 3133-based watch set a space record for the longest space flight in history. During the Soviet era, Soviet watch brands including Poljot, but also Raketa watches, were marketed in the United Kingdom under the brand "Sekonda". Today's Sekonda company, a British distributor of ubiquitous fashion watches, has no connection to any Russian watches.

At the turn of the 21st century, the First Moscow Watch Factory began reproducing many of their most famous models as limited edition commemorative pieces. Replicas were made of the famous 1960s Shturmanskie worn by Yuri Gagarin, the 1940s Kirova pilots chronograph, and the 1970s Ocean. All of the replicas became sought-after collectibles. In late 2003, rumors predicting the demise of the Poljot brand circulated on the Internet. According to the rumors, the First Moscow Watch Factory was to cease producing their own models and become a source of inexpensive movements for other European watch brands. These rumors never came to fruition. Instead, in the late 2000s, the company was bought by the businessman Sergeï Pugachev, becoming one of the companies of his new luxury group, including: Hédiard, and the channel Luxe TV. Volmax marketed watches under the Aviator, Buran, and Shturmanskie brands using movements produced by another russian firm, MakTime. As of 2012, the status of the Poljot brand is unclear, though the brand appears to be moribund. MakTime, the company utilizing old Poljot equipment to manufacture mechanical movements, went bankrupt, and Volmax, the successor company to First Moscow Watch Factory relocated to Switzerland. Present models from the Volmax company are Swiss-made, using design cues from vintage Russian models. All Antique watches are mechanical. Many repairs will not be cheap, as most likely they will require replacement of non-standard parts (unlike most late model watches). Antique watches should not be beaten or dropped - because repairs may be expensive.

Antique watches are generally NOT waterproof. This is because waterproofing was not in general production until the middle of the 20th century for most watches. Therefore you should protect your antique watch from exposure to moisture. If your watch becomes wet it should be dried off quickly. Carefully open all covers and use a hair drier to blow dry the movement, dial, covers, crown.

This will reduce the amount of rust. If your watch becomes wet with any kind of salt water you should immediately immerse or spray your watch with fresh (no-salt) water to remove all the salt from the works before drying the watch completely. Any salt left in the watch will combine with moisture in the air to rust metal components of the movement, case etc. Winding any mechanical watch tight may break the mainspring. If you can avoid it do not wind the watch hard. When adjusting the hands of your watch, move them in a clockwise direction only. Counter-clockwise adjustments may damage the movement. It is desirable to adjust the hands of your watch at the same time every day.

An automatic or self-winding watch should be worn for at least 8 hours a day. It is a mechanical watch in which the mainspring is wound automatically as a result of natural motion of the wearer's arm, to provide energy to run the watch, making manual winding unnecessary. If you must adjust counter-clockwise make it for small adjustments only i. Be careful and gentle when adjusting the movement speed (faster or slower).

Don't make sharp movements, and don't touch other components in the movement especially the pendulum mechanism. Every 2-3 years it is necessary to service and oil vintage watches. If the course of your watches is worsening and the accuracy of the reduction in the duration of the clock (autonomy) from one fully wound spring - it need a service. IF the watch is dirty - allow the watch to run down, don't wind it again until you have it serviced by a qualified watch repair expert.

Dust will absorb and remove important lubricants and cause the movement pieces to wear down. To clean the case, dial and crystal you should use a cloth that does NOT leave fibers as these may get caught up in the movement. Check with your Watch repair expert to get an appropriate cloth. Keep your antiques watch away from magnets. Strong magnetic fields may affect the accuracy of your watch since some vintage watches were made with iron based components in the movement.

Most Cases and Covers are fine components and will not handle abuse well. The watch should not be shaken, beaten, or stressed. Antique watches generally experience an error of up to 5-7 minutes a day. Any accuracy of +- 5 minutes is very good.

Mechanical watch is not recommended to use for engage in extreme sports, and expose them to excessive vibration loads. Recoil force, which take on the clock, affect their reliability and precision.

No matter how perfect was not anti-shock mechanism, there is always the chance of excessive load that details of the mechanism can not survive. It is not recommended to adjust, the date between 20.00 and 06.00, because at this time involved a mechanism for automatic adjustment date. Translation pointers calendars manually in this position arrows may damage the mechanism. Date changes should be made, relegating pre-clockwise to lower sector of the dial for example, to position 6 (18.00) hours.

It is impossible to address issues if we do not know about them! Thank you for your interest in our products! Please let me know if you have any questions. The item "Poljot aeroflot 2616.2H collectible USSR automatic stainless steel wristwatch" is in sale since Wednesday, December 9, 2020. This item is in the category "Jewelry & Watches\Watches, Parts & Accessories\Watches\Wristwatches".

The seller is "dmytro_yaroshenko" and is located in Cherkasy, Cherkasy region. This item can be shipped worldwide.